Really?!?  Yep, its almost April 15th!!  Time sure does fly when tax day approaches.  Have you gotten all those receipts sorted?  Are your deductions all calculated?  Is everything in the correct column?  What have you forgotten?  Did you receive a bonus last year?  Did you give someone a gift?  What about your business mileage?  Do you have all your W-2s and other forms?

There have been many changes in the tax laws and you need to be aware of those so you file correctly.   I am way out of my element when it comes to tax laws, therefore, I send my files to a professional to do the calculations.  Its just safer for me to do this instead of making a huge mistake on my taxes.

I am finding out more and more ways to stay organized thru the year to make it easier and smoother when it comes to this time of year.   For one, I try to keep all my receipts in one place and try to write on each one that is for business. 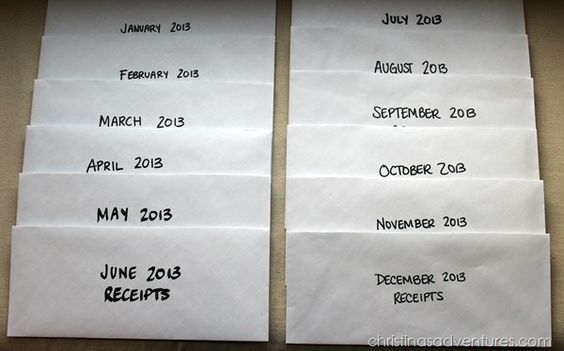 I try to sort them each month but at least each quarter.


I am a bit less stressed this year.  In years past, I had been in heart attack mode because of being disorganized.  NO MORE!!  Having a handle on my "affairs" has reduced my stress emincely and I hope next year will be even better.


So, if you a late doing yours then its time to get a move on.  They won't do their selves!!
Posted by Daizy at 5:41 AM No comments:


I am working of revising the blog.   I am so very sorry that I have not had a post in so long.  I won't offer any excuses because they would lame ones.  Hoping to change all that.


Hugs and prayers,
Daizy
Posted by Daizy at 5:41 PM No comments:

Things have sure changed over time here on the Poor House Ranch.  As a child I could find quail everywhere.  My Pop's dogs would always jump them up out of the bushes and tall grass.  When we drove out to check cows we would see several coveys scurry across in front of us.   They would fly up right in front of the horses and ponies and startle our mounts.  Well, time passed and their numbers became less and less.  For many years now I have been very sad because I never saw them....ever.  I have gone years without hearing them sing or seeing them fly.  Lots of things contributed to their demise.  Things like coyotes, hawks, foxes even habitat changes.  Could one person change things?  Could I help?  I didn't know but it was worth a try.  So.... 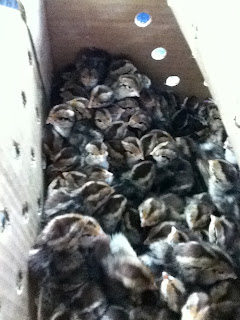 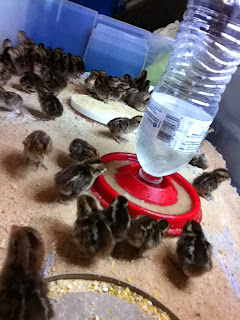 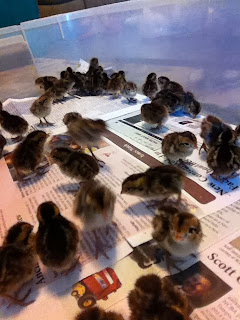 This spring I ordered day old quail babies from a well known and reputable hatchery.  100 !!!  And they are soooo tiny when they arrive.  And so fragile.  I really had to learn a lot and be watchful for trouble on those teeny tiny birds.   Oh, I lost some and cried for everyone that didn't make it.  I read more and tried to learn more to help them survive.  That was a tough venture.  The babies have to be kept at 100 degrees for awhile then gradually drop the temp down to 90 and kept at that temp for a period of time then drop the temp again.   It took months.   And they grew and grew.  Quail are birds that get startled by the slightest sounds so they would run from me when I would feed them or water them or clean their space.   Where was their space?   In my bathroom, of course.  It was like a sauna in there!! 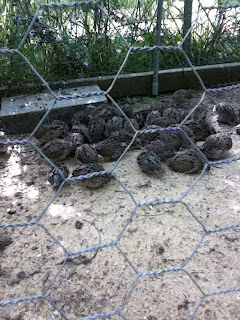 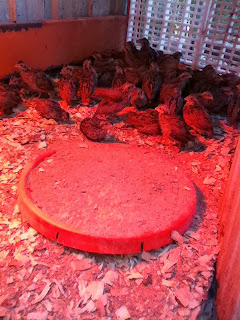 Once they acclimated to a  temperature that was more normal and spring turned into summer I moved them outside into a small enclosure but still had the heat lamp on them so they could warm up if they choose to.  And they grew.   They began to chirp and make sounds.  When I approached with food and water they would be ultra quite like they do in the wild.  I had hopes that they would survive once I released them. 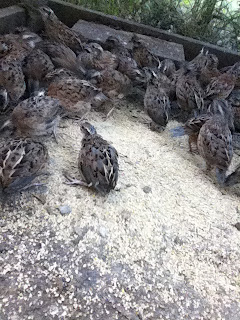 That time came and it was way too soon for me....the mother bird.  I opened the end of their enclosure and spread out their feed in the tall grass and stood back.   They slowly ventured out and began pecking and scratching the ground in all that grass.  My heart swelled.   They stayed around their pen for days and I got to feed them a little longer.   They would come in from farther and farther out to get food and then one day they didn't come in at all.

I have chickens and would call them and feed them and after several days the quail showed up again.  They had split up and gone in different directions.   Some came from one way and still others came from another way.   Slowly they stopped coming in for chick food but I would find them out in the pastures.  I could hear them singing.  I knew they made it. 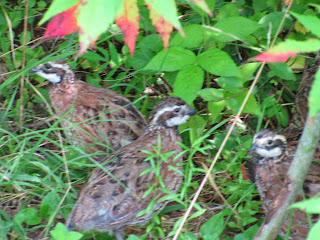 I haven't seen them in some time now but I have faith that they are out there in the brush and along hedge rows doing what quail do.   My neighbors about a mile in each direction have told me of their sightings of my quail in their yard and around the barn so they are surviving. 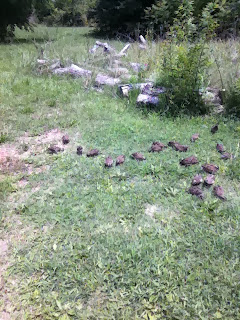 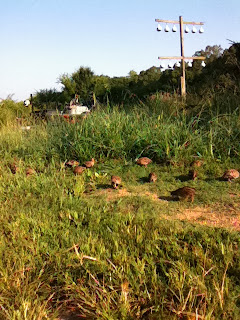 I hope to add to the quail population again next summer by investing in day old chicks again.  It was expensive but very rewarding.   I go outside sometimes and give a whistle like a bob white quail and off in the distance I can hear a reply.  It is so magnificent.

In my small way, I HAVE helped.  And that's what being a good steward of the land does.

Back in the winter, I ordered day old chicks and when they arrived it was down right cold so they stayed in the house.   Yep, I am a good rancher. 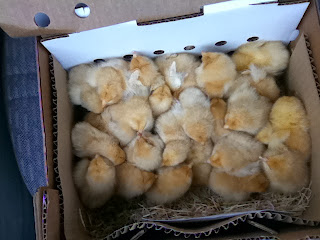 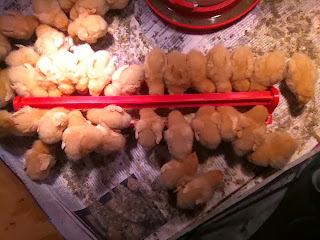 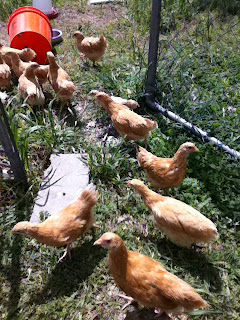 They had to stay warm so they stayed in my bathroom under the heat lamp for weeks.  They grew fast but the weather didn't warm up fast.   So they stayed in my bathroom.   Finally it warmed up enough to go outside, along with their heat lamp, to a small shelter. And they grew some more.  Now they are beautiful yard birds, free ranging and eating all the bugs and seeds they can find. (Do you see the horses watching from the gate?) 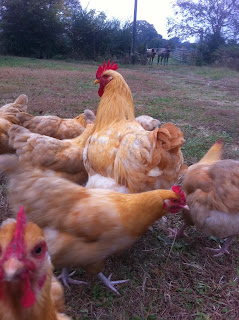 Look at the biggest one. That is the rooster,  Mr. Fancy Pants.  He crows right outside my bedroom window about 4 AM (way before day light).  Its one of those sounds that is like nails on a chalk board.  He is a mixed bird.  I think he is mixed with a turkey because of his size and the sounds he makes......perhaps a goose......who knows!!

I have been throwing out scraps and some chicken scratch in an area that will be my garden next spring.  They have almost tilled the soil and removed all the grass.  They have also deposited lots of poo to help with the soils fertility.  They are roosting in the tree tops, for now, until I get the coop finished, perhaps this weekend. 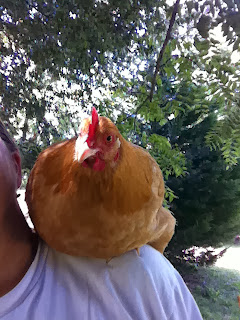 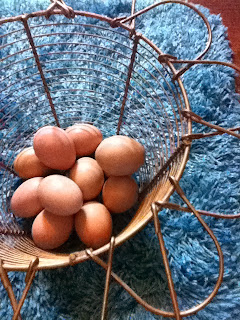 The eggs began coming all at once. The eggs were laid all over the yard!  I had 33 laying each day!  Needless to say, many eggs went to waste and still others were not found until there was a pile of them.   Its fun to gather eggs but I will be glad when they are in a coop and its not like hunting Easter eggs every day.   I have lost some birds to the varmints also.  The plan is to coop them at night and free range them in the day.

Check back next week.  My post will be about my quail. 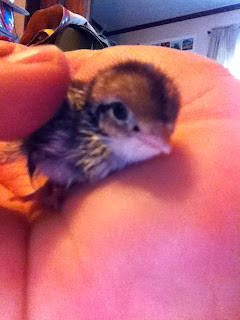 What a wonderful time to be here at The Poor House Ranch.   There was a new calf born just the other day.  Her momma is very proud of her baby .... and very protective.  That's a good thing.  I want the mommas to be watchful and to call for and go fetch their babies.  It shows good maternal traits.  I like to see the mommas bounce back after delivery and this one sure did.  She was up grazing in no 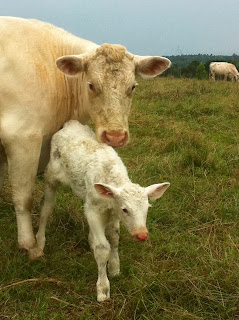 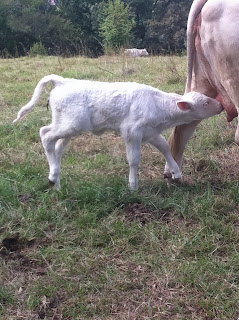 time.  She wasn't upset when her calf bounced around. That sweet little calf took off running and couldn't figure out how to stop!!  Her momma just raised her head and watched while munching on the last of this summers grass.   Life is so precious.   I am in awe most of the time here on the ranch.  Each moment brings something new and amazing.  I have been ranching for many many years and it never gets dull.  Change is constant....
Posted by Daizy at 6:55 AM No comments:

TODAY IS THE FIRST DAY OF THE REST OF MY LIFE.....